GCHQ director Iain Lobban, has said there were “enduring lessons” to be drawn from the work of Alan Turing.

Based at Bletchley Park, the mathematician was part of the team that cracked the Nazi Enigma code – a vital part of the allied war effort.

He is now widely recognised as a computing pioneer.

However, at the time of the death – which an inquest recorded as suicide – he was virtually unknown to the public. His work at Bletchley was kept secret until 1974.

Mr Lobban said Turing had a played a key part in the “irrevocable change” that eventually led to the development of the “highly technological intelligence organisation that GCHQ is today”.

Describing Turing as one of the “great minds of the twentieth century” he said that staff at the organisation had demanded that he make “a big public deal” of Turing’s legacy as part of celebrations marking the centenary of the codebreaker’s birth.

However, Mr Lobban said he didn’t want anyone to think GCHQ was “trying to claim that Turing is ours and nobody else’s”.

The codebreaking work at Bletchley marked a shift – Mr Lobban argued – to a mindset that “started to see technology as something that could be pitted against technology”.

He said the consensus among his staff was that today Turing would be employed in “Cyber”.

“Then, the challenge was to secure allied codes and ciphers” he said. “Today, securing cyberspace… requires the collaboration of experts as diverse both personally and intellectually as any we saw at Bletchley Park.” 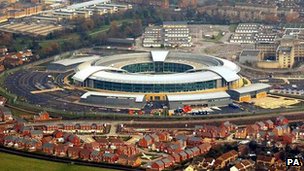 Mr Lobban said technology “lies at the very heart of our mission”.

“Engineers and technologists are an essential part of our success.”

But, he added, that meant there was a need to develop key skills.

“We must inspire school children to study maths and science – we must find tomorrow’s Turings,” he said.

“The fact that Turing was unashamedly gay was widely known to his immediate colleagues at Bletchley Park: it wasn’t an issue,” he said.

“I don’t want to pretend that GCHQ was an organisation with twenty-first century values in the twentieth century, but it was at the most tolerant end of the cultural spectrum.”

Later in his life Turing was convicted of gross indecency after an affair with another man. He was subsequently obliged to take injections of female hormones in an effort to dull his sex drive.

After his arrest he was no longer given an opportunity to carry out work for GCHQ.

Mr Lobban said “we should remember that the cost of intolerance towards Alan Turing was his loss to the nation”.

He added that today it remained vital that the agency recruited the best people and did “not allow preconceptions and stereotypes to stifle innovation and agility”.

“I want to apply and exploit their talent: in return, I think it’s fair that I don’t need to tell them how to live their lives,” he said.

Anatolian Rock created by ‘The Mongols’