Thousands of Syrians who have fled from the fighting in their country are living in refugee camps just inside Turkey. But some have gone further west to the coastal city of Izmir – a place itself scarred by wanton killing and destruction in World War I.

When a city is destroyed, what can we say of the buildings that rise in its place?

Are they a completely new metropolis? Or must something of the spirit of the old, no matter how fragmented, always haunt the present?

It is a question which must occur to any sentient traveller in the cities of the eastern Mediterranean. where great civilisations have risen, glittered brilliantly, then vanished into kingdoms of broken stone and dust.

But I do not think it has ever occurred to me with such poignancy as in Izmir, the city the Greeks once called Smyrna, before their 3,000-year-old living presence in Asia Minor was all but expunged. 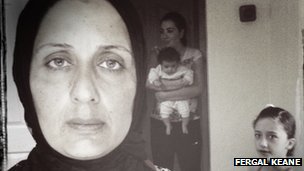 But it was not possible to hear the stories of Syrian refugees without thinking of what befell the substantial populations of Greeks and Armenians in Smyrna in September 1922 in the aftermath of the World War I.

Ancient empires had collapsed. The Hapsburgs and the Ottoman Turks – who between them had dominated central Europe and the near East – were consigned to fast-receding memory.

The victorious British and French appointed themselves guardians of the Middle Eastern territories of the defeated Ottomans and helped bequeath to modern generations no end of troubles.

But it was the Greek invasion of the Ottoman lands of Asia Minor that set in train the disaster of Smyrna.

With British support they invaded Anatolia in 1919 and marched inland.

There were massacres of Turks and these helped infuse a powerful nationalist response.

When the Turkish army defeated the Greeks and descended on Smyrna, there was wanton killing of tens of thousands – pillage and rape and the great fire whose effect is measured now in absences. 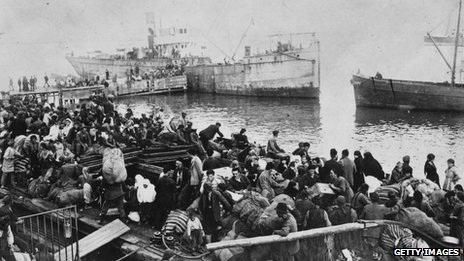 Gone are the streets in which the voices of Greeks, Turks, Armenians, Levantines and Jews mingled.

Lost is the rich mix of cultures that drew inspiration from the great philosophical and religious traditions of West and East, that traded and prayed and made music and told stories in the narrow lanes of the bazaar and by the glittering water of the Aegean on summer evenings.

The crisis ended in 1923 with a treaty providing for the mass exchange of populations across the region. Muslims were forced to go to Turkey by the Greeks. Christians were forced to go west by the Turks. More than a million and a half people were uprooted.

To the traveller wandering modern Izmir in search of the past, it is as if the Greeks had never been here. 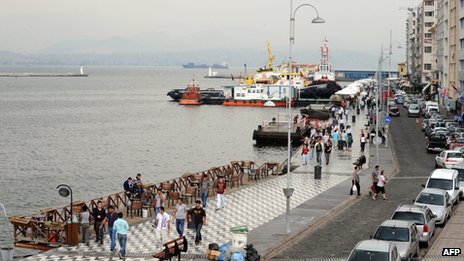 Many of Izmir’s old buildings have disappeared

A handful of old buildings remain but there is a squat ordinariness about the architecture of the place now – wonderfully friendly though its people are, and golden though the light remains as as you walk the quayside in the late evening.

I was watching the sunset in the company of a young Syrian man, who gave his name as Mehmet.

He had fled his country three months ago. He had deserted the army and fled west.

Last month he attempted to reach Greece, the first step on a journey he hoped would take him to Germany or Britain where he might begin a new life. But the smugglers had sent him to sea on a dangerous boat.

There were as many as 100 people on board, most of them women and children, when it struck rocks and overturned.

“There was a boy I had befriended,” he told me, “a child of about 12 and I’d told him that when we got to Europe, I would look after him.”

The boy drowned along with 60 other refugees.

As he tried to save his own life by swimming to shore, Mehmet remembered a woman and her child both fighting to cling onto him.

He did not say what he did when this happened and I did not ask him. His face was contorted with pain.

I asked him what he would do if he got to Europe.

“I would study guitar and then teach it,” he said.

Mehmet was a classical guitarist. His favourite pieces of music were the Preludes of Johann Sebastian Bach.

But in the escape from Syria, he had left his guitar behind. The music in him had been silenced.

But still, like all those numberless refugees before him in other wars, he kept his eyes fixed on the sea, on the idea of another life that was surely waiting if he could only cross the water.

UK and US in talks for use of bases