Neo-Ottomanism and Pan-Turkism of Recep Erdogan

Erdogan: No true Muslim can be a terrorist

U.S. Secretary of State Hillary Clinton said Wednesday that the Syrian National Council can no longer be seen as leading the opposition to embattled Syrian President Bashar al-Assad. Washington is hoping new rebel leaders emerge next week from a meeting of Assad opponents in Doha.

Secretary Clinton said Syria needs a united opposition dedicated to representing and protecting all of the country’s ethnic groups, and resisting efforts by extremists to hijack what she says has been “a legitimate revolution against an oppressive regime.”

“We’ve made it clear that the SNC can no longer be viewed as the visible leader of the opposition,” she said. “They can be part of a larger opposition. But that opposition must include people from inside Syria and others who have a legitimate voice that needs to be heard.” 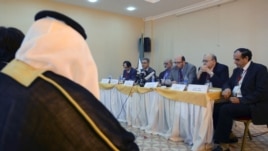 ​​The United States has grown increasingly frustrated by the SNC’s failure to include more opposition leaders inside Syria, its personality-driven leadership struggles, and its inability to attract a broad cross-section of Syrians, particularly minority Alawite and Kurds.

“This can not be an opposition represented by people who have many good attributes but have, in many instances, not been in Syria for 20, 30, 40 years,” said Clinton. “There has to be a representation of those who are on the front lines fighting and dying today to obtain their freedom.”

Speaking to reporters in the Croatian capital, Zagreb, Clinton said the United States has recommended names of individuals and organizations it says should be included in any leadership structure that emerges from next week’s meetings in Doha.

Clinton said Washington has not given up on the mediation efforts of United Nations and Arab League Special Envoy Lakhdar Brahimi, but that three Security Council vetoes by Russia and China mean there is little momentum for a political transition with consequences for those who violate its terms.

“While we urge Special Envoy Brahimi to do whatever he can in Moscow and Beijing to convince them to change course and support a stronger U.N. action, we cannot and will not wait for that,” added Clinton.

Clinton said she is not surprised that the recent Brahimi-mediated cease-fire in Syria failed because the Assad government did not suspend its use of advanced weaponry against the Syrian people.