Egypt’s President Morsi has ordered the military to maintain security and protect state institutions in the run-up to a referendum on the constitution.

The BBC’s Jon Leyne in Cairo says the move will raise fears that Egypt is moving back towards military rule.

Mr Morsi has tried to calm days of protests by annulling a decree giving him huge powers, but a 15 December vote on a new constitution is to go ahead.

Opposition leaders rejected the move and called for protests on Tuesday.

Islamist groups have said they will hold counter demonstrations, raising fears of further bloody clashes on the streets of the Egyptian capital.

In another apparent concession, the president reportedly suspended a big tax increase on the sale of a variety of goods including soft drinks, cigarettes and beer.

The decision was carried in a statement that appeared on Mr Morsi’s Facebook page in the early hours of Monday, state-owned al-Ahram newspaper reported.

It is not clear if the opposition will boycott the referendum, our correspondent says, although that seems to be the implication.

They say the body that drafted the constitution was dominated by Mohammed Morsi’s Islamist allies.

In a statement after talks on Sunday, the opposition National Salvation Front said it would not recognise the draft constitution “because it does not represent the Egyptian people”.

“We reject the referendum which will certainly lead to more division and sedition,” spokesman Sameh Ashour said. 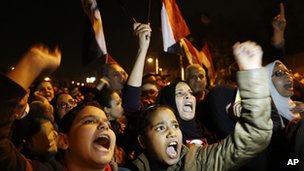 On Sunday, hundreds of opposition protesters gathered outside the presidential palace in protest at the referendum.

They chanted anti-Muslim Brotherhood slogans and held up banners reading slogans such as “Morsi, hold back your thugs” and “The people demand the fall of the regime”.

“The voting will still take place on the 15th and we are all here because we’re saying no, none of us want a cult to rule us,” said one protester quoted by the Associated Press news agency.

Amid the rising tension, Mr Morsi ordered the military to maintain security and protect government buildings until the results of the referendum are announced.

The new presidential decree is effective from Monday. The military is asked to co-ordinate with the police on maintaining security and is also entitled to arrest civilians.

The army has built a wall of concrete blocks to seal off the presidential palace, which has been the focus of opposition demonstrations.

Earlier, Mohamed Soudan, foreign relations secretary of the Muslim Brotherhood’s Freedom and Justice Party, said Mr Morsi was constitutionally bound to go ahead with the vote.

The president says he is trying to safeguard the revolution that overthrew Hosni Mubarak last year, but his critics accuse him of acting like a dictator.

Mr Morsi’s decree of 22 November stripped the judiciary of any right to challenge his decisions and triggered violent protests.

Although the decree has been annulled, some decisions taken under it still stand.

The general prosecutor, who was dismissed, will not be reinstated, and the retrial of former regime officials will go ahead.