More than half a million people have now fled the conflict in Syria to neighbouring countries, according to the UN’s refugee agency.

The UNHCR says it has accounted for 509,559 refugees so far, primarily in Lebanon, Jordan and Turkey, and that many more are yet to come forward.

More than 2m people are also thought to be internally displaced within Syria.

Meanwhile, a UK-based activist group says rebels led by an Islamist faction have seized an army base near Aleppo.

A video posted online on Monday showed rebels overrunning the Sheikh Suleiman base near the key northern city of Aleppo and seizing military vehicles.

The base is now fully under the control of rebels led by the Islamist al-Nusra Front, the Syrian Observatory for Human Rights said.

Correspondents say the sprawling base was the only significant government facility remaining in a broad stretch of countryside west of Aleppo.

Western nations have expressed concern at the role of Islamist groups like the al-Nusra Front in the insurgency in Syria.

On Monday, US Secretary of State Hillary Clinton designated the al-Nusra Front a foreign terrorist organisation, freezing any assets its members may have in US jurisdictions.

Arab Uprisings week on the BBC 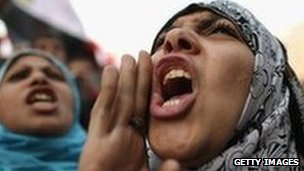 The designation is largely symbolic because the group is not thought to have holdings or support in the United States, but officials hope the penalties will encourage others to take similar action and discourage Syrians from joining.

Activists also reported continued government bombardment and fighting in outlying areas of the capital Damascus, which has seen fierce clashes in recent weeks.

The UNHCR says Lebanon is playing host to most refugees, with 154,387 Syrian refugees either registered or in the process of being registered there.

“Protection teams described the night-time arrivals as fearful, freezing and without proper winter clothing,” she added.

Since the beginning of November, 3,200 new Syrian refugees have been registered every day in the region, although some of these are thought to be people who had been in the host countries for some time but had not sought help.

Most Syrian refugees were currently living outside camps “often in rental housing, with host families, or in various types of collective centres and renovated accommodation,” the agency said.

“The numbers of those struggling to live on the local economy and who eventually come forward to register are expected to increase,” it added.