Ankara has issued a strong attack on the European Union (EU) for what it calls a “bigoted” assessment of Turkey in its report on EU membership requirements published in October. In response, Turkey drew up its own report released this week to counter Brussels’. Despite the current acrimony, Ankara is expressing hopes its membership bid will get back on track with Ireland taking over the EU presidency.

In an unprecedented step, Ankara, earlier this week,  published its own assessment of its progress to join the ranks of the European Union in reponse to Brussels’ critical assessment which raised concerns over deteriorating human rights in the country. 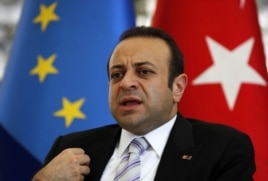 ​​In the 270-page report, Turkey’s Minister for EU membership, Ergemen Bagis, claimed such criticism is “bigoted” and “politically motivated.”

Turkey began EU accession negotiations in 2005, but the process has been extremely slow.

So far only a few areas of negotiation – called “chapters” – have been opened. Just one chapter has been completed.

Many influential politicians in France, Germany, Austria and some other EU countries are opposed to granting Turkey full membership.

But international relations expert Soli Ozel of Istanbul’s Kadir Has University said with the Irish taking over the EU presidency, Turkish-EU relations could turn a corner.

“Ireland is a good country to preside now over the EU. It has good relations with Turkey,” said Ozel. “I think Turks like the Irish so we may see some movement in the right direction in Turkish EU negotiations.”

Dublin taking over the EU presidency comes with growing expectations in Ankara that Paris could ease its opposition to Turkey’s bid. The new French President François Holland does not share his predecessor Nicolas Sarkozy’s ardent opposition to the Turkish bid.

Turkish Foreign Ministry spokesman Unal said there is a room for cautious optimism.

“We are working with EU partners and countries supportive of Turkey’s EU accession. I think it will not be wrong to say receiving positive signals,” said Unal. “But on the other hand its early to speak about concrete outcomes.”

According to Sinan Ulgen, head of Edam, a research institute in Istanbul, Ankara is reassessing its stance towards the EU after recent years of growing indifference. He said, “The foreign affairs minister [Ahmet Davutoglu] has realized that the Arab Spring is going to be much more problematic for the countries in question and also for Turkey’s relationship with those countries than what had been initially estimated.”

“So it’s true that Turkey is seeking security by strengthening its alliance with its traditional partners in the West,” Elgen added. “That is the case most particularly with regard to Washington but also to some extent with the EU.”

Turkey’s vibrant economy and large market could give further incentive to the EU to reinvigorate its relations with Turkey. But analysts warn the bringing of Turkey’s bid out of its present static state, will likely mean that Ankara will have to address more seriously Brussels’ growing concerns over the state of human rights.