Court in Egypt orders retrial for Mubarak after appeal

Court in Egypt orders retrial for Mubarak after appeal

A court in Egypt has ordered a retrial for ex-President Hosni Mubarak after accepting an appeal against his life sentence over the deaths of protesters.

Mubarak, 84, was overthrown in 2011 after mass street protests in the capital Cairo and other cities, and jailed in June.

Ex-Interior Minister Habib al-Adly will also be retried on the same charge.

Mubarak, who remains in custody, will also be retried on corruption charges for which he was acquitted in June.

He led Egypt for almost 30 years, surviving six assassination attempts, before the revolt against his rule.

Mohammed Morsi of the Muslim Brotherhood was elected president in June.

Judge Ahmed Ali Abdel Rahman announced: “The court has ruled to accept the appeal filed by the defendants… and orders a retrial.”

Mohamed Abdel Razek, one of Mubarak’s lawyers, told Reuters news agency the retrial would be based on the same evidence used in the previous trial. 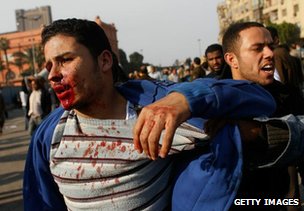 “No new evidence will be added to the case,” he said.

At the request of prosecutors, Judge Abdel Rahman also overturned the acquittal of Mubarak, his sons Gamal and Alaa, and fugitive businessman Hussein Salem on corruption charges.

A new panel of judges could consider the former leader’s health when issuing their verdict, Mubarak’s lawyer added.

Since Mubarak was jailed in Cairo, there have been frequent reports about his ill-health.

He is currently in a military hospital after hurting himself in a fall in his prison bathroom last month.

On Saturday, the former leader was reportedly questioned over gifts worth millions of Egyptian pounds which he allegedly received from the country’s flagship state newspaper, Al-Ahram.

He was ordered detained for 15 days pending the investigation, a judicial source told AFP.

Sunday’s ruling was met with cries of “Long live justice!” by Mubarak supporters who held up his picture and hugged each other in the courtroom while dozens more outside shouted “We love you, president!”, AFP news agency reports.

On 2 June, following a 10-month trial, Mubarak and Adly were convicted of conspiring in the killing of protesters.

The two men had faced possible death sentences over the killing of 850 protesters.

Families of victims were disappointed that Mubarak had not been convicted of ordering the killings, the BBC’s Aleem Maqbool reports from Cairo.

There was also dismay among some that he had not been tried for abuses allegedly committed earlier in his rule.

At the same trial in June, Mubarak was acquitted of corruption.