Turkish PM Recep Tayyip Erdogan has suggested that the murder of three Kurdish activists was the result of an internal feud.

The three women were found shot dead at the Kurdish information centre in Paris on Thursday.

The victims included Sakine Cansiz – a co-founder of the militant nationalist Kurdistan Workers’ Party, the PKK.

Mr Erdogan said evidence suggested the deaths may have been intended to sabotage efforts towards peace talks.

Some 40,000 people have died in the 25-year conflict between the Turkish state and the PKK.

Mr Erdogan said early evidence pointed to the women opening the door to their killers and the centre being locked from the inside with a lock requiring a code.

“Those three people opened it. No doubt they wouldn’t open it to people they didn’t know,” he said, according to comments published by the state-run Anatolian news agency.

It is the first time that such a senior member of the PKK has been killed in Europe. There has been a tacit agreement between the PKK and the Turkish government that no such high-profile attacks would be carried out against either senior PKK members or senior members of the government.

During the 1980s, there were some attacks believed to be from within the Turkish state against members of the militant Armenian group Asala, but there have been no political assassinations targeting the PKK.

The Paris killings come against the backdrop of fresh peace talks between jailed PKK leader Abdullah Ocalan and the Turkish government. Those talks have not been easy and have opponents on both sides.

The Turkish government says the previous round of peace talks was derailed because of a clash between Turkish soldiers and the PKK in June 2011.

Thursday’s killings will make the current negotiations even more difficult, no matter who might be behind the attack.

He said earlier that the incident could be a “provocation” from sections of the PKK opposed to talks between the state and the group’s imprisoned leader, Abdullah Ocalan, aimed at persuading the PKK to disarm.

France has pledged to investigate fully the “unbearable acts”. Interior Minister Manuel Valls said the killings were “surely an execution” and President Francois Hollande described them as “horrible”.

The BBC’s James Reynolds, in Turkey, says that Kurdish activists believe the killings were carried out by forces in the Turkish state itself intent on derailing the talks.

Our correspondent says that many people in Turkey believe that there is a so-called “deep state” – a powerful nationalistic establishment which seeks to undermine the work of democratic governments and activists.

The three women were last seen inside the information centre on Wednesday afternoon. Later, a member of the Kurdish community tried to visit the centre but found the doors were locked.

The bodies of the three women were found in the early hours of Thursday morning. According to French media they had been shot in the head or neck.

One of them was Sakine Cansiz, who was detained and tortured in Turkey in the 1980s, and was close to Ocalan. 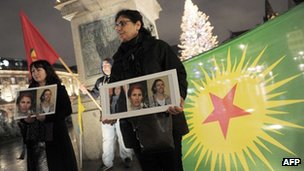 Kurds living in France gathered to protest against the killings

A second woman has been named as Fidan Dogan, 32, who worked in the information centre. She was also the Paris representative of the Brussels-based Kurdistan National Congress.

The third, named as Leyla Soylemez, was a young activist.

The PKK took up arms in 1984, demanding greater autonomy for Turkey’s Kurds, who are thought to comprise up to 20% of the population.

It is regarded by Turkey, the US and European Union as a terrorist organisation, because of its attacks on Turkish security forces and civilians.

In 2012 it stepped up its attacks, leading to the fiercest fighting in decades, but violence has subsided in recent months.

What did Prof.Terman say about Ottoman Special Education?