Turkey and the PKK: The Kurdish women who take up arms

Turkey and the PKK: The Kurdish women who take up arms

The execution-style killing of three women in Paris last week threw a spotlight on the murky struggle between Turkey and its Kurdish rebels. But how did women from such a conservative society rise to prominence in a paramilitary organisation?

Among the three women killed was Sakine Cansiz. Photographs soon circulated showing her in khaki military uniform, standing alongside the leader of the Kurdistan Workers’ Party (PKK), Abdullah Ocalan.

She was one of the most visible symbols of women within the military and political ranks of the Kurdish movement.

In a society where women were ‘invisible’, the PKK valued them as individuals”

The PKK, which Turkey, the EU and the US list as a terrorist organisation for its attacks on Turkish security forces and civilians, is a highly capable force.

It has battled the huge Turkish army for nearly three decades, in the name of greater Kurdish autonomy.

And it contains one of the largest contingents of armed women militants in the world.

This is in stark contrast to many insurgent movements in the Middle East.

‘Movement within a movement’

Women have been at the heart of the Kurdish movement almost since the formation of the PKK in 1978, when it was strongly influenced by Marxist-Leninist ideas. 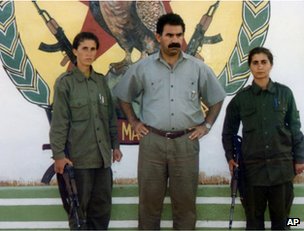 Under Ocalan, who is now in prison, the PKK attempted to reinvent itself as “a social movement with self-administration at local level, an alternative type of economy, ecology and feminism as central pillars”.

The group is perceived by many Kurdish women as a means of empowerment.

They are prominent in the PKK’s leadership council and there is a separate women’s party with its own armed wing.

Meanwhile, the main Kurdish party in the Turkish parliament, Peace and Democracy (BDP), applies a minimum 40% women’s quota and always has a man and a woman as joint party presidents.

But Dr Kariane Westrheim, a Norwegian academic who conducted field work among female PKK militants in the Qandil mountains in northern Iraq, says: “Even if the PKK had gender issues on the agenda, and also female co-founders, women have struggled hard to get their voices heard and to develop their own organisational structures.

“In many ways, the organisation of women in the PKK became a movement within the movement”. 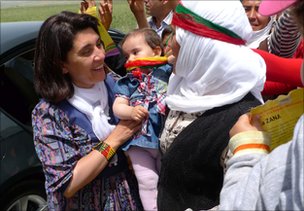 Leyla Zana has a passionate following among Turkey’s Kurds

The number of Kurdish women in the PKK grew in the 1990s, when the conflict intensified.

Partly this is related to the PKK’s increased mobilisation in both rural and urban areas, in universities and across Europe, and its emphasis on women’s rights.

According to Dr Handan Caglayan, an academic from Turkey who has studied the role of Kurdish women in the conflict, Ankara’s handling of the Kurdish crisis – in which villages were razed to the earth, and family members were killed or disappeared – led to the increasing politicisation of women.

Leyla Zana, 52, one of the movement’s most famous and symbolic figures, became a campaigner for Kurdish prisoners in the 1990s, when her husband was jailed for 16 years following the 1980 military coup.

According to Dr Westrheim, the most common motive for women joining the PKK is “the general oppression of all Kurds, male and female”.

But, she adds: “It is also about emancipation from the general oppression of women in Kurdish rural areas perpetrated by the state and by the traditional family structure.”

Dr Caglayan explains: “In a society where women were ‘invisible’, the PKK valued them as individuals and provided an atmosphere to express themselves.”

For traditional and conservative families, letting their daughters join the ranks of the PKK’s armed wing was not a straightforward process.

In the beginning, Kurdish families resisted the idea that their daughters would take up arms and live side by side with men.

“However, the legitimacy gained by the organisation’s struggle among Kurdish people eventually made it difficult for them to prevent their daughters joining the PKK,” Dr Caglayan says.

The PKK’s policy of strictly forbidding its men and women to have sexual relationships certainly helped traditional families not to see their daughter’s joining the organisation as an insult to the “honour” of the family.

But, Dr Caglayan says, while the PKK’s success in mobilising women has started to change attitudes in Kurdish society, within the family change is coming about much more slowly.

Nevertheless, joining the Kurdish struggle has implied a human cost for these women – not only by leaving their family home, but often by giving up any hope of having families of their own.

And for many, it is ironic that empowerment of Kurdish women has only become possible through taking up arms.