The Turkish Prime Minister, Recep Tayyip Erdogan, says he favours the retrial of hundreds of military officers convicted of plotting to overthrow the government.

It comes after his senior adviser suggested that the officers had been framed by the police and judiciary.

Hundreds of people were jailed in 2012 and 2013 in two high-profile cases, called Sledgehammer and Ergenekon.

“Our position on a retrial is a favourable one,” Mr Erdogan told reporters in Istanbul on Sunday.

“First we must establish the legal grounding for fresh trials.”

“For decades, the armed forces exercised a final say in the way this country was governed. Between 1960 and 1997, the military deposed four civilian governments.

But the election in 2002 of Recep Tayyip Erdogan’s Islamic-inspired AK Party began to change the balance of power in Turkey. The government formed an unofficial alliance with a network of prosecutors who were followers of a prominent Islamic scholar, Fathullah Gulen.

These prosecutors – known as Gulenists – pursued military officers on charges of plotting to overthrow the government. The conviction of several dozen senior officers in the Sledgehammer and Ergenekon cases of 2012 and 2013 was a sign of the military’s dramatically reduced political power.

But the Erdogan-Gulenist alliance has now come apart. In December, some of the same prosecutors who investigated the military charged the prime minister’s allies with corruption. In response, Mr Erdogan accused the judiciary of illegal plotting. The military has made the same allegation, which Mr Erdogan now appears to support.

No-one here suggests that the military is about to recover its former role as the final arbiter in political life. But, if a retrial of convicted officers is ordered, the armed forces may be a beneficiary of the power struggle between the government and the Gulenist network.”

It comes as political tensions run high over alleged corruption in the Turkish government. Mr Erdogan has accused the police and judiciary of orchestrating a probe which led to the resignation of his ministers.

The ruling AK Party is rooted in political Islam and has moved to curb the power of the Turkish military, which sees itself as guardian of the modern secular state founded by Mustafa Kemal Ataturk.

The removal of the military from politics is seen by some analysts as Mr Erdogan’s greatest democratic achievement.

The prime minister now appears to have taken the side of the military he once opposed, says the BBC’s James Reynolds in Istanbul. In recent days, the army has filed a criminal complaint calling for retrials.

During the early years of his administration, Mr Erdogan formed an unofficial alliance with prosecutors in an effort to remove the military from politics, our correspondent says.

This effort culminated with two major trials relating to separate alleged plots – Sledgehammer and Ergenekon. They were seen as major challenges to Turkey’s secularist traditions.

But in December, some of the same prosecutors involved in those investigations ordered the arrest of a number of the prime minister’s own allies.

Three ministers resigned after their sons were arrested, along with dozens of others, over alleged wrongdoing in construction contracts and deals with Iran.

Mr Erdogan condemned the investigation as a “dirty plot”.

The armed forces then suggested that this “plotting” also included the convictions of officers, and demanded a retrial. 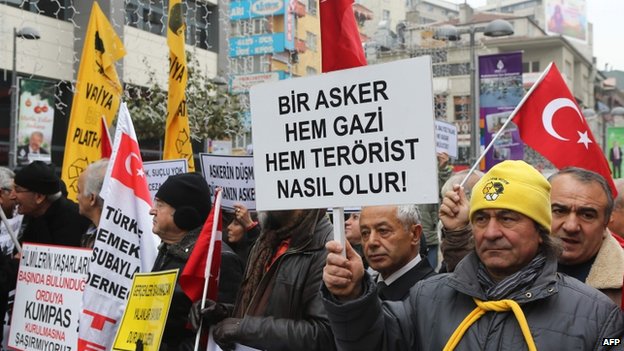 The former armed forces chief, Gen Ilker Basbug, was among dozens of people given long jail terms. Lawyers, politicians and journalists were convicted, along with many military officers.

Analysts say the latest dispute over corruption is part of a power struggle between Mr Erdogan’s government and an influential US-based Muslim cleric, Fethullah Gulen, who is said to have many followers within Turkey’s police and judiciary.

For decades, the armed forces were the ultimate arbiter in Turkish politics.

Between 1960 and 1997, the military forced out four civilian governments.

But over the last decade, Mr Erdogan’s government has changed the balance of power in Turkey.

‘Neither graft, nor dual justice’ says Union of Turkish Bars